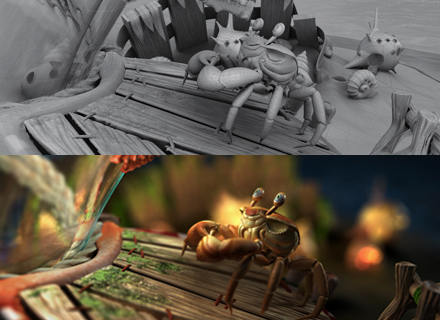 It’s is an exciting time here at Ember Lab and we have decided to start a blog to post the most recent news about the company. This week we launched our first game on the App Store. It is called Crabs and Penguins. Last year we pitched a concept for a 60 second fully CG commercial and integrated iOS game to Coca-Cola. The story followed a tiny Crab who embarks on an epic adventure to bring “happiness” to his community. Crabs and Penguins (CAP) grew from that original pitch as we partnered with the Coca-Cola Content Factory to produce a unique branded entertainment experience including a beautifully animated commercial and an engaging mobile game.

CAP has received very positive reviews so far and currently has a 4 star rating on the app store. An android version of the game will be released next month and the game trailer is fast approaching 600K views since being released just 2 days ago on June 27th. Visit the Crabs and Penguins website to learn more about the project. The game is designed to work with iPad 2, New iPad, and iPhone 4S.

CAP gave us an opportunity to work with some amazing artists including our Art Director, Wanchana Intrasombat (Vic), Salvador Ramirez, Frank Tzeng, Carlos Ortega and many more.  Download the game and check the info button to see a complete list of our talented team. It has been an amazing journey creating Crabs and Penguins. A huge thank you to Stafford Green from Coca-Cola and everyone who help send the Hero Crab on an epic journey!