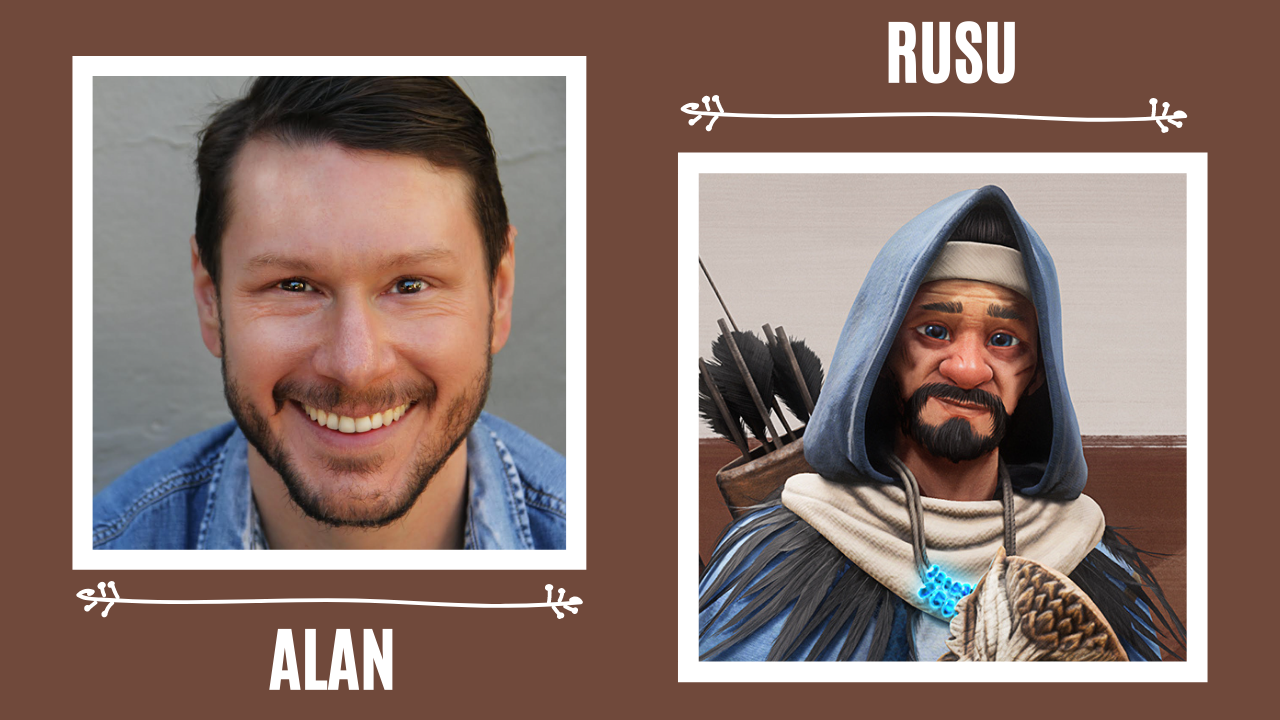 Meet Alan Adelberg, the voice of Rusu the Huntsman! Rusu will guide you well on your quest as a Spirit Guide, teaching you some important skills and providing insight into the village! Alan lends his own wisdom and teaching experience to his character, striking the perfect balance between insight and mystery.

Originally from Louisville, Kentucky, Alan became hooked on performing at a young age. Growing up, he recalls that “family dinners often turned into improv sessions with set-ups and punchlines happening naturally as [my brothers and I] tried to crack each other up.”

From there, Alan went on to study theater at the Youth Performing Arts High School in Louisville. He later attended Emerson College before spending a year abroad teaching English in South Korea. There, Alan had a revelation that inspired him to get into voice acting:

“I came to truly understand the power of language and intentions, how we’re able to convey meaning to one another even if we don’t necessarily understand each other’s words. That experience hit me like a lightning bolt and excited me about all the possibilities voice performance has to offer.”

When Alan returned to the United States, he immediately sought a voice coach and got to work cutting his first voiceover demo. It worked out quite well for him!

As a multi-faceted artist, Alan has extensive voice acting experience. In addition to his work on Kena: Bridge of Spirits with Ember Lab, he has been featured in commercials for Kia, Glad, Planet Fitness, Lego, and Toyota. In the gaming world, you may have heard him in titles such as 3 Out of 10, Battlestar Galactica Deadlock, Grim Dawn, Fear Effect: Sedna, and Marvel Avengers Academy. He has even recorded voiceovers for anime, including Funimation’s Shironeko Project: Zero Chronicle!

Alan has a clear passion for his work, and he brings much of his experience and personality to his roles. He might even be more like his character than he thinks. Although Alan may not be as gifted an archer as Rusu, he did win a few fencing championships in high school! “But hitting a moving target with an arrow? I’ll leave that to the experts like Kena.”

Alan now lives in Austin, Texas, with his wife, Katherine, and their tailless cat, Otis.

After you get started playing Kena, make sure to keep an eye (or ear) out for some of Alan’s other projects. He can be heard in 3 Out of 10, a playable sitcom that takes place in a game development studio. Both seasons are now available for free at the Epic Games Store!

He will play Brother Aeturo in the video game Warhammer 40k: Battle Sector,

Alan’s final word on voicing Rusu: “It was an honor.”

Find out more about Alan and stay up to date with him here: